Synthetic Approaches to Triarylboranes from 1885 to 2020 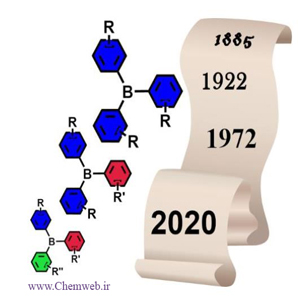 Download Synthetic Approaches to Triarylboranes from 1885 to 2020 In recent years, research in the fields of optoelectronics, anion sensors and bioimaging agents have been greatly influenced by novel compounds containing triarylborane motifs. Such compounds possess an empty p-orbital at boron which results in useful optical and electronic properties. Such a diversity of applications was not expected when the first triarylborane was reported in 1885. Synthetic approaches to triarylboranes underwent various changes over the following century, some of which are still used in the present day, such as the generally applicable routes developed by Krause et al. in 1922, or by Grisdale et al. in 1972 at Eastman Kodak. Some other developments were not pursued further after their initial reports, such as the synthesis of two triarylboranes bearing three different aromatic groups by Mikhailov et al. in 1958. This review summarizes the development of synthetic approaches to triarylboranes
from their first report nearly 135 years ago to the present.